Skip to content
FREE SHIPPING ON ALL U.S ORDERS!
Menu What parents are saying about Swaddle Sleeves:

We were struggling without the swaddle, countless sleepless nights. It was a nightmare… when I came across this sleep sack with weighted sleeves, and It was a God’s sent. She has been sleeping through the night since. 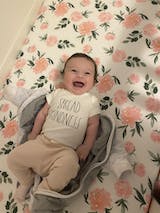 We love our swaddle sleeve sack! We had to buy a second to have on hand. I love that I can help my daughters startle reflux, while being able to move freely, and have an easy way to change her diaper. This has allowed us to make a smooth transition out of her swaddle! 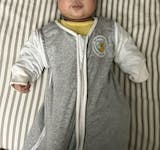 I was really struggling with my boy and his startle reflex. I had to stop swaddling his arms down but the merlin magic sleep suit was still too big for him and he was having a hard time adjusting to it. Someone recommended this product to me and made such a huge difference. It’s a great transition swaddle. I am very happy with my purchase I highly recommend it! It’s definitely a safer option because they have control over their movements rather than weighing their whole body down which my doctor said was dangerous! I’m super happy with this purchase and I would definitely recommend this to a friend!

Swaddle sleeves are truly MAGIC. My 5 month old has been struggling with sleep ever since transitioning out of the swaddle. Her first night in swaddle sleeves… she went straight to sleep! I couldn’t believe it. Not to mention she’s slept so well every single night since we started using them. Swaddle sleeves are a life saver!!!! 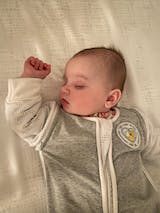 We’re trying to transition out of a regular swaddle into a sleep sack, but our son has a very strong startle reflex. I’ve been dreading this for weeks but he’s been using the weighted sleeves during nap time and it’s working!! The sleeves help dampen his startle but give me peace of mind that he’ll be ok if he does roll. 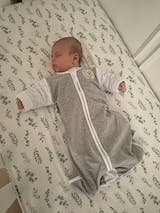 We tried all different kinds of swaddles and this one has been the best! Our baby could wiggle out of any kind of swaddle and would get angry when he couldn’t reach his hands. We bought this swaddle when he turned 3 months old and it has done a great job keeping him comfortable, asleep, and happy. We’re glad he has the ability to get to his hands and has his arms free when he rolls, but isn’t awakened by any reflex movements. 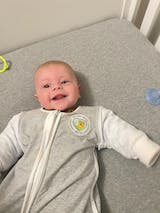 I did as many other moms do, and read the reviews. One caught my eye, her daughter was swaddled and always woke herself up by being startled. Well this is my daughter to a T. Swaddle or no sleep for anyone. So I ordered one, it came, she hated being put in it, but like magic. She would be out in a couple min. I can not recommend this enough! 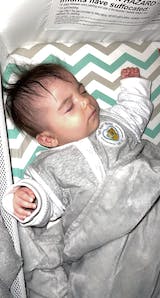 Great quality product, with and without sleeves. My grandson loves his sleep sack! 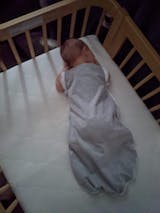 My LO had arms that never stopped. When he started breaking out of his swaddle I spent so much $ on everything I could think of…then I found Swaddle Sleeves. I wish I had found them sooner. They provided the perfect balance of freedom and control for his arms. 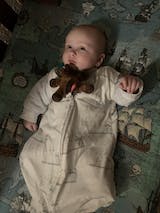 We purchased this in hopes to help our 6 month sleep better. He loves being swaddled but was too big to be swaddled and is rolling over. So we bought this and the first few nights were not successful but we kept using it in hopes it would start helping him and now we’re a couple weeks in a he’s sleeping so good! When I put his to sleep he stays asleep for a good 4 hour stretch (compared to waking every hour) and if he gets startled he falls right back to sleep on his own or with just a couple bottom pats. 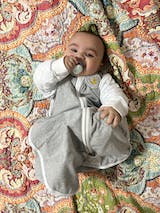 A good alternative to the Merlin suit, I was looking for something just like this that would dampen the Moro reflex as my baby transitioned out of the swaddle at 10 weeks. He is able to move his arms and bring his hands to his face for soothing but doesn’t flail as much as when arms are completely free. My one complaint is the fold over design of the mittens should have longer material. My baby always has a finger or two that will poke out and on multiple occasions he’s able to then get his whole hand out and that would distract/wake him up. Improved fold over mitten design with more/longer material should fix this issue. See pic. 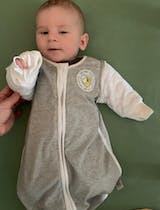 Great feedback! It’s this kind of feedback that helps us improve our products and make them even better, so thank you!

I didn’t realize how much my little 3 (almost 4) month old likes this sleep sack until she had a blow out, and I had to use a different name brand one… she refused to nap for the rest of the day until I had time to wash this one and put her back in it!! It’s a lifesaver. My only complaint is I wish I could buy extra sacks to zip the sleeves on to, but this is a pretty pricey product to buy a completely new one.
Also, I was worried the sleeves would be too heavy, but my baby is still able to self soothe when wearing this. It also keeps her at a good temperature and she doesn’t get too warm. Highly recommend!

Our baby loved being swaddled, but when he showed signs of rolling, we knew it was time to transition him out of the swaddle. We tried the swaddles that allow for 1 arm out at a time while still having compression and a weighted sleep sack. Unfortunately, neither alleviated the startle reflex, which kept waking him up as he would try to fall asleep. We would even gently hold his arms down until he was in a deep sleep to stop him from startling himself awake, but be able to have his hands free in case he rolled at night. We then happened upon Swaddle Sleeves and it was the ticket! He now falls asleep and stays asleep just like he did with the swaddle. I only wish we could combine the weighted sleep sack and the swaddle sleeves! 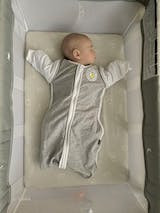 We needed to transition our baby girl out of her swaddle so we got this weighted sleeves sack. It took her a day to adjust to it, but now she falls asleep just fine. It dampens her reflexes just enough, but allows her to move her arms comfortably so she can self soothe and suck on her thumb at night. She's also a bit on the smaller side so we were able to roll up the sleeves so she can reach her hands, and the sleeves do stay rolled. I also like that there's enough space for her legs so she isn't squished in there!

First week of transitioning out of the swaddle has been going great because of the swaddle sleeves sleep sack! Our little love bug absolutely loves how cozy it makes her feel! 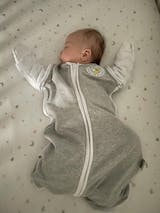 I thought that my son would have some trouble for his first few naps or night sleeping in the sleep sack, but he slept just as good as when he was swaddled! He is about three months old and he loves the swaddle, but he is doing great with the sleep sack as well! My only suggestion is to sell separate sacks in case there is a blowout and you need to wash the sack. That way you can just zip on the weighted sleeves to the other sack and go about your night. Because of the price I can’t justify buying a second one just for this instance!

The idea sounded good, but that doesn’t mean it will work for an infant. We tried a couple of other items that said she would sleep better in a couple of days. Thankfully, this arrived (many days later than expected due to shipping issues outside their power) and 3 days later she slept through the night! So grateful for this purchase! 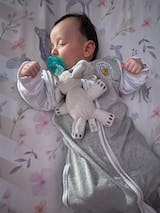 I’m so glad I found this! My 6 week old started rolling to his side and accidentally rolled to his belly while swaddled. So I had to stop swaddling him and he was startling himself awake soooo much. This definitely calms his startle reflex and he sleeps more consecutive hours at night. I’m so thankful that we tried it! 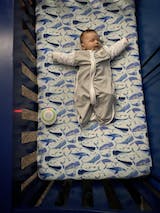 We started the swaddle sleeves when our babe was 3 months old, he absolutely hated being swaddled but would always startle and wake. This has been a life saver. He’s now 5 months and we transitioned out of the sleeves to regular mittens and he’s doing great. Our fav product we own! 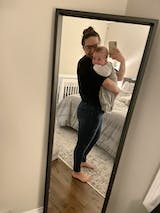 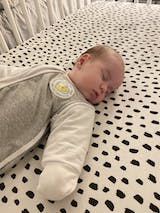 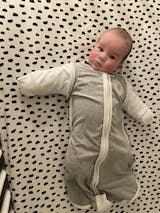 Helped transition babe from swaddle to arms out! Thank you. Didn’t want to wake up after taken out of crib. 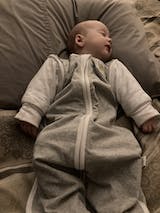 I was so so worried for our swaddle loving baby’s transition out of the swaddle. However, she started breaking out of her swaddle halfway through the night and waking herself up. We started swaddle sleeves for naps, and have been using it for 3 nights now. Sleep is the same as with the swaddle! So grateful for this product. 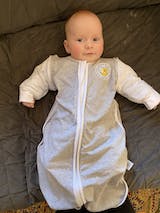 I was so skeptical about this sleep sack, especially because I hadn’t even heard of it before one of my good friends suggested it to me. Let me start by saying my baby absolutely LOVED her swaddle. I bought this sack to use when we were ready to transition from it. She was sleeping 10-11 hour stretches in her swaddle and I was terrified to take her out of it. Well, yesterday at 11.5 weeks she rolled over and we knew we had to stop right away. Insert swaddle sleeves. I was so anxious when we laid her down but she was out right away. I’m typing this now as I nurse her at 6:20am, after she slept NINE hours straight!!!!! No wakes. I know she can sleep longer than this, but for her first night without her beloved swaddle I am so impressed and happy. The swaddle may not even be missed after all! She was so peaceful all night. We actually noticed more restlessness before swaddle sleeves. 10/10, worth every penny, will be buying the next size up when it’s time!! Thank you swaddle sleeves for making what was going to probably be the worst night ever so easy! 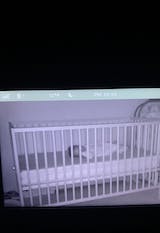 My baby boy hated having his arms swaddled since he was a week old. He is a super busy little man with a strong Moro reflex. This is where the swaddle sleeves have been life changing for us. As soon as we started using them he started to wake only once a night for feeding and would fall right back asleep. Even on days that he is cranky during the day, as soon as we put him in his swaddle sleeves sack or bodysuit he settles and falls asleep. At two months old he had his first full night sleep! In my opinion, swaddle sleeves are a miracle! We already have the next size up on stand by. As you can see in the photos my little man approves! 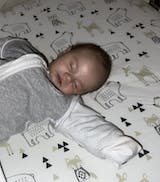 Had trouble getting my daughter from being swaddled to arms out on her own! This swaddle helps her startle reflex and keeps her asleep longer!! 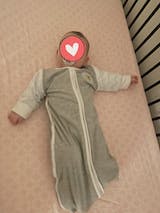 Great way to use as a transition way from swaddling to out. Our LO has been rolling in his swaddle and the swaddles sleeves helped so much in his startle reflex. He's now been able to freely roll over to his tummy and mostly sleep all throughout the night!